It happens to every letterboxer eventually. You're out in the cold, biting air, found the landmark listed in the clue, then go to pull out your compass—but alas, you forgot it!

Sometimes it's still possible to snatch victory from the jaws of defeat. Estimate where north is and work around that. Several methods may be used to estimate due north, and some ways that don't work so well despite popular myths. We'll cover good ways to determine north, and some not-so-good ways. 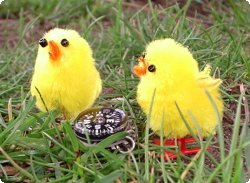 From most of the United States, the sun—if it's out—will always be slightly to the south, and your shadow will point north. In theory, it should point (more-or-less) due north at high noon. If it's Daylight Savings, you'll have to adjust the 'high noon' time to 1:00pm.

This principle is what makes the "watch compass" work. In a nutshell, if you have a traditional watch (i.e. not a digital watch) and point the hour hand towards the sun, due south will be exactly in the middle of the hour hand and 12:00 on your watch. (Use 1:00 instead of noon during Daylight Savings.) If you don't have an analog watch but still know the time, draw a clock on a piece of paper and the theory still works. It's not the watch that tells you what direction is north or south, but rather the time of day in relation to the sun that does it. The reason you need to find the halfway point between the hour hand and noon is because most watches are divided into 12 hours even though the day is divided into 24 hours. If you had a watch with 24 hours on it, pointing the hour hand towards the sun would ensure twelve noon always pointed due south. Instead of remembering these complex rules, however, it's usually easier to remember why the concept works and work out your directions from there.

Another effective technique to determine orientation—especially if you have a good topographic map on hand—is to compare your position with known landmarks on the horizon. If you know that a certain mountain should be west of you and you can see that mountain, then you've just figured out which direction is west. And due north would be 90° to the left of that. The landmarks to choose from are endless. Have you been hiking north on a (more-or-less) north-south trail? Does the river you followed downstream head east? Because if it does, so are you. Is there a town in the distance that should be south of you? If you can see the town, you've just found south.

There's also the possibility that other hikers on the trail might be carrying a compass. If there's someone passing by, it never hurts to ask if they have a map, compass, GPS or just 'know' which way is north. Some keychains even have a primitive compass attached. You'd be surprised at how many people carry a compass—even if they don't plan to use them!

There's a popular myth that moss grows on the north side of a tree. Let's nip that myth in the bud. That's one of the worst ways to determine which way is north. In fact, depending on your part of the country, north may be the only side of the tree that moss does not grow on! Moss is green, like the leaves of a tree, because of the chlorophyll in its cells. Moss needs sunlight to produce food for itself, and can be found on any side of a tree. In deserts such as Arizona, you'll unlikely find moss at all. In other locations such as the Pacific Northwest, you'll probably find moss on all sides of a tree. This is not an effective technique for orienting yourself and should not be used.

In the unlikely event you're letterboxing at night without a compass, learn to recognize some of the more prominent constellations such as the Big and Little Dippers. The north star, Polaris, is always due north, but even if you can't see that star because of trees or clouds, you can frequently figure out where it would be based on the position of surrounding constellations that might still be visible.

Keep in mind, all of these methods for orienting yourself tell you where true north is. The compass directions you'll be following will probably be based on magnetic north. You'll have to adjust your estimate for true north depending on your declination. If you don't know the declination for your area, use can still use your true north estimate, but realize it could be off by as much as 30 degrees.

But sometimes, despite all your best efforts, you just can't figure out your west from your east or north from your south. The box still might be findable. If the clue asks you to take a small number of steps from a landmark, you might be able to search that number of steps in every direction. If you know the box is at a tree 50 steps from a given landmark, and only three trees are 50 steps from it, you've narrowed your search to three trees.

With a little thought, luck and determination, most letterboxes that use compass directions can still be found—even without the compass. And if you still can't find it, come back again later—but bring a compass next time! =)