Letterboxing started in Dartmoor, located in the southwest corner of England

The year was 1854, and a Victorian guide named James Perrott placed a bottle in the wildest, most inaccessible area on Dartmoor, England, along the banks of Cranmere Pool. In it, he included his calling card so future visitors could contact him and leave their own calling cards. Little did anyone know, this small act would be become the hobby we now know as letterboxing.

A hike to Cranmere Pool in 1854 was anything but a simple walk in the woods. This area regularly receives over 100 inches of rain each year, and the peat acts as a sponge making travel through the soft, wet ground a severe challenge. The easiest access point required a nine mile, one-way hike through this difficult terrain, and the low, undistinguished profile of Cranmere Pool meant that hikers could easily miss the pool even if they found themselves within a few hundred feet of it. Those who made it to Cranmere Pool were justifiably proud of their accomplishment and recorded their accomplishment by including their own calling cards in the bottle. Needless to say, not many people picked up James Perrott's calling cards in those early years.

In 1888, a small tin box replaced the original bottle. Visitors left self-addressed postcards and the next person to visit the letterbox (except if it was a same-day visitor) would retrieve the postcards and mail them back from their hometown.

By April 1905, another upgrade was in order—particularly a means by which the increasing number of visitors could record their attendance. For the first time, it included a logbook, and a zinc box replaced the tin box.

The first suggestion for a rubber stamp appeared in the logbook on July 22, 1907 by John H. Strother who wrote, "Reached the pool at 7.10pm, misty day with cool breeze, and would suggest that a rubber stamp, something like the post office stamps for postmarking letters or rubber stamp for putting the address at the top of a piece of notepaper be provided and kept here. If this were done it would be proof that cards posted had really come from Cranmere." The letterbox finally reached the point as we largely know it today as a box containing a logbook and a rubber stamp.

In 1976, Tom Gant created a guide map pinpointing the fifteen letterboxes in existence, at which point letterboxing began to boom in a big way. The number of letterboxes tripled the next year and in the 1980s grew into the thousands. Letterboxing became a full-fledged hobby in its own right, and letterboxers who wanted to distinguish themselves started to create descriptive names for themselves and personal stamps to mark the letterboxes they found.

Unfortunately, this wild west of letterboxing did not work out very well. Letterboxers started pulling apart historic rock walls, painting graffiti marking the location of letterboxes, and so forth, and Dartmoor National Park wanted to crack down by removing all but the Cranmere Pool and Ducks Pool letterboxes, both of which at this point had permanent structures to house the contents.

This is when another man, Godfrey Swinscow—affectionately known as God—swooped in and rescued letterboxing from extinction. He met with officials from Dartmoor concerned about the impact of letterboxing, wined and dined them, and hammered out a code of conduct still in use to this day: 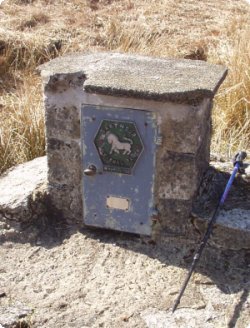 The Cranmere Pool letterbox, as it stands today

As the number of letterboxes exploded on Dartmoor, a loose confederation of letterboxers formed the 100 Club—formed when there were just 100 letterboxes on the moor!—to recognize the achievements of those who found at least 100 letterboxes. The official clue book is only for members of the 100 Club, but other than that, it's largely a club that does not exist. There are no meetings, no committees, and no membership fees. Godfrey was once called, in a Tavistock Times article, the 'unofficial president of a club that doesn't exist.' As of March 2006, this non-existent club had nearly 14,000 members!

Letterboxing stayed a mostly Dartmoor-only tradition until April of 1998 when the Smithsonian magazine published a small article in the United States about this oddly British hobby found on the moors of southwest England. Many people read the article and loved this treasure hunt concept wishing it was a bit closer to home. A few readers, however, found each other through means of the relatively new Internet and decided to take matters into their own hands by hiding letterboxes for each other in the United States.

Through this effort, Letterboxing North America (LbNA) was born. By 2001, over a thousand letterboxes spotted the United States covering all 50 states. Letterboxers traveling to international locations started to plant letterboxes around the globe from Aruba to Zimbabwe.

Atlas Quest made its debut a few years later in 2004. Ryan Carpenter, an unemployed software engineer, started with the idea of allowing letterboxers to create a virtual online logbook to show off all one's finds and plants. Things often do not turn out as planned, and he ended up creating the city search making it easier than ever to find clues for letterboxes from around the world.

Atlas Quest has continued to grow supporting message boards and alternative letterbox types such as postals, cooties, and virtuals into the website you see today while LbNA has largely stuck to its roots by focusing on the support of traditional, post-Smithsonian letterboxes.

James Perrott never could have guessed his small act would evolve into a rubber stamp addiction among adventurists from around the globe 150 years later. What will happen with letterboxing in the next 150 years?

None of the information on this page is new nor is it complete. To read additional details about the history of letterboxing and the people who helped form the hobby into what it is today, check out the following resources:

Two books in particular helped greatly in getting the details about letterboxing in Dartmoor correct. Both books can be difficult to find for those residing outside of the United Kingdom, but if you can track them down, they are a wealth of interesting information: Dartmoor Letterboxes by Anne Swinscow and Cranmere Pool: The First Dartmoor Letterbox by Chips Barber.

Read about Cranmere Day, held on May 8, 1937, to dedicate a new structure for the Cranmere Pool letterbox.

A more detailed history of letterboxing in the United States can largely be found online—especially in the archives of the original LbNA talk list.